I was out and about running Saturday searching for records. I had stumbled upon a person earlier in the week that lived about a 100 miles away that had a pile of 45's and arranged to meet with him. I had known going in that out of the pile of records he had there was only 1 that I wanted but he wanted to sell them all so I was forced to buy them all. But what a purchase it was- a rarity upon magnitudes. I guess I have to be cryptic right now because I can't upload anything new until I purchase a new computer. I also picked up some other cool things and decided that little 100 mile jaunt needs to be revisited again (although not soon as my wife was a bit peeved I was gone so long Saturday). Today, I bought a few things (nothing fantastic) from a woman. I had met her and her husband at a yard sale and he died within the last year. I bought some pretty cool 45's from him and he had some amazing Garage 45's he would not sell me. He told me some fantastic stories about finds over the years..one story he told was finding hundreds of Federal and Chess silver tops 45s and EP's in the sleeves in mint condition at a thrift store for a dime a piece. He said he was riding a bicycle and was so loaded down with 45's he ended up calling his boss to pick him up as he could not ride it. I would have probably called in sick! I asked her about any of his personal records he would not sell (as it sure was not the stuff I looked at today) and she thought he sold all the others as this was all that was left. I guess he had a massive heart attack. So I am sitting here toasting a beer to Bobby and the few hours of stories he told me a year ago.
Speaking of earlier of my continued computer problem, I checked out Best Buy Saturday and it was all I could do to continue waiting but I held off. Black Friday better have some damn deals, that's all I have to say.  Tonight's post is not the cleanest sounding 45 but one that gained attention thanks to DJ Shadow. It took me years to find this and within 2 weeks of finding it I scored a 2nd copy. 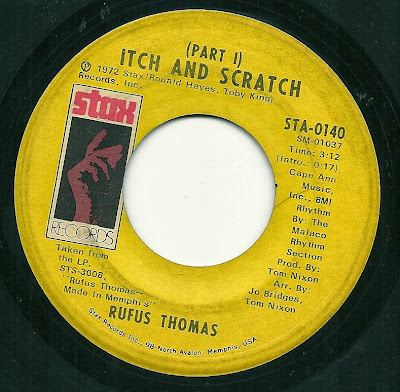 Posted by Poppacool at 6:40 PM No comments:

The Yeomen My Girl Full Of Happiness

I have been going through the computer trying to come up with some postings and I have to tell you what a pain. Over the past year I recorded 45's to the computer but did not scan the labels, or I scanned labels but .....did not record the 45. Once I get a new computer I have some organizing to do with these pesky files!
Here is a bubblegum 45.....I'll see if I can match up some soul. Speaking of soul, I have over the past month lucked into some fantastic soul 45's, matter of fact I have picked up some fantastic all around 45's. 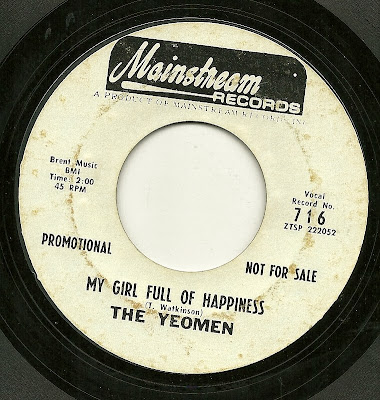